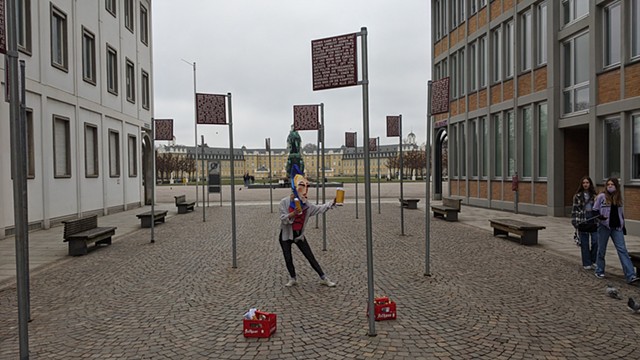 The history hidden within the Rothaus Brewery’s logo, the Schwarzwaldmädel (Black Forest Girl), is probably unknown to most German beer lovers... the character is modeled after an operetta written by Jewish composer Leon Jessel during the First World War. Jessel converted to Christianity when he was 23 and identified as a German Nationalist. His blonde, blue eyed Schwarzwaldmädel was an idealized icon for purity, home and tradition. Her likeness became a symbol in Germany’s cultural landscape during WW1. In the logo for Rothaus beer, she smiles with beers in both of her hands, waiting for her love to return from war. The Schwarzwaldmädel operetta was loved by both Hitler and Himmler but the Nuremberg laws stripped the Schwarzwaldmädel of her Jewish heritage and performance of Jessel’s works (and all music/theater written by artists with Jewish heritage) were banned in 1933. At 69 years old, Jessel was arrested and tortured by the Gestapo and died a year later in the Berlin Jewish Hospital. In 1950, the Schwarzwaldmädel was remade by Hans Deppe (very successful Director/Actor throughout the war) becoming the first color film shown in West Germany since WWII. The film attracted over 14 million people to the theaters- the most popular film since the war. It’s success reignited the utopian Heimatfilm (Homeland film) movement throughout the 1950s. The Schwarzwaldmaedel survived the Second World War though her creator did not. Her image is still seen on Rothaus bottles and merchandise today.

For this performance, I utilized the tropes of Purim and dressed in a hand-made costume of the Schwarzwaldmädel, distributing groggers. Groggers are noisemakers used in the Purim ritual to shake and "boo" whenever the antagonist of the story is mentioned as a way to wipe his name from history. These groggers were designed to look like Rothaus beer bottles. Each grogger had a small Megillah booklet attached which told the story of Purim through the history of the Rothaus beer logo and the Schwarzwaldmädel operetta. I built a space into the mask to hold a speaker, which played selections from the Schwarwaldmädel operetta, giving the impression that the woman was singing as I distributed the Jewish ritual objects to passerbys.